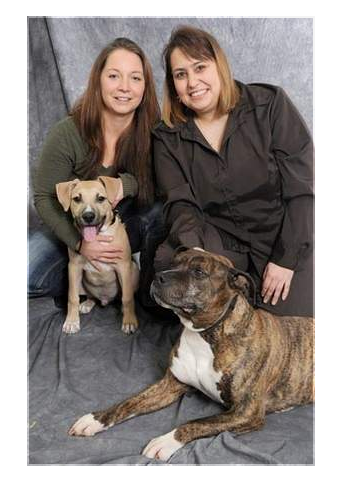 Last weeks's attack by three canines who went after a Kamloops man walking his daughter's dog has resurrected the decades-old debate about pit bulls and whether the breed should be banned. The Daily News talked to the owners of three American Staffordshire Terriers, who say they don't want Kamloops to ban pit bulls or the breeds considered related to pit bulls as a result of a dog attack last week.

One of the three, April Landry, has bred American Staffordshire Terriers for almost 20 years. She has talked to the owner of Ernesto, Molly and Cellia - the three dogs who turned on Mickey Prefontaine and the dog he was walking, Zep. The trio are alleged to have attacked Prefontaine and Zep, biting so hard they injured the man through three layers of winter clothing. Ernesto is an American Staffordshire terrier, Molly is an English bulldog, and Cellia is a daughter of the two, a designer crossbreed the owner referred to as an Anglican bulldog, she said. Landry has seen photographs of the three dogs and confirmed they looked like the
breeds the owner said they were.

Which raises the question: Are they pit bulls? It depends on who you talk to.

Pit bull can be used to refer to a group of dogs that includes American Staffordshire Terriers, American Pit Bull Terriers, and Staffordshire Bull Terriers. The Canadian and American kennel clubs don't recognize pit bulls as a breed, but the United Kennel Club does list the American Pit Bull Terrier. They have similar traits, but there are subtle differences a breeder or aficionado could pick out. For someone not in the know walking down the street, however, the dogs would probably all be labeled as pit bulls. Landry insists on calling her dogs American Staffordshire terriers and would never refer to them as pit bulls. But some people would look at her dogs and call them pit bulls, she admitted.

Tiffany Burns grew up with American pit bulls in the family since she was 4 years old. She bought an American Staffordshire off Landry last September, named Jackson. She used to work with people with disabilities and took her dog to work with her.

"To me, the problem is with the training," she said. Anyone with a large dog of any breed should ensure their pet has proper training. "The issue isn't the breed as much as the characteristics of the dog." Landry and another Staffordshire owner, Linda Jackson, have let little kids play with their dogs. Jackson's grandchildren have never been threatened by her dog, Thunder, who she described as a "big baby." Landry's kids are 12 years old and nine months. She trusts her dogs around them. Her 11-year-old show dog male, Sting, received a Canine Good Citizen certificate that involved him being tested by the kennel club for tolerance and obedience. "He might look intimidating, but the certificate attests to his good temperament," she said. "With this breed, it's important for people to see the good behaviour side of it," she said. She's only been bitten once, by a strange American Staffordshire she had taken in to find a new home. He wasn't neutered and wasn't playing well with a smaller dog. She picked up the little dog and the Staffordshire jumped up and caught her on the arm as she twisted.

All three women love their dogs and love the breed. They described American Staffordshires as loyal and gentle. "They are good pets, I have to say," said Jackson. But they aren't for everyone. Nor should they be. "They are a great breed. It's just the amount of work people want to put into them," said Landry.

City bylaws supervisor Brian Cassel said the City continues its investigation into the dog attack. Most of the people involved have been interviewed and staff were slated to meet to discuss the next step in the process. Mayor Peter Milobar said a pit bull ban would be difficult to enforce, especially because of mixed breeding. And it wouldn't stop attacks by other breeds of dogs. City council went through the dog debate several years ago, and in the end came out with a dangerous dog bylaw that puts the onus on the owner, not the breed of dog. "If I see pit bulls, I get nervous, too. But I also recognize our bylaw is trying to address the fact that German Shepherds, Rottweilers and Dobermans can be a problem, too. The City's bylaw is proving effective, as the dog attack is being investigated and followed up," he said. "That's why I support banning the deed, not the breed, so that all breeds and dogs and owners are held to the same standard," said Milobar. "Almost every single time a dog attacks somebody or an animal, almost the first thing you hear from the owner is 'my dog would never attack anyone.' It's unfortunate when something like this happens
but we do have a process to address it once it does."

He said the City process is so onerous for dog owners that many of them have their dogs euthanized rather than jump through the dangerous-dog hoops laid out for them. "I think it works. I think depending on the situation, we seem to get calls that either it's too harsh or it's not harsh enough. But short of saying nobody's allowed to have a dog, how could we pre-guess which dog is going to do something?"

This morning I was reading the newspaper online and came across the weekly question asking, "Are you in favour of banning pit bulls?"

When I read this I became outraged. Why would this even be up for consideration?

This is to those who voted Yes. Have you ever seen a pit bull? Have you ever played with one? Have you ever been around one for more than five minutes? If you said no to any of those questions then you should have been banned from voting yes.

Many people pass judgment on a pit bull without ever encountering one. Maybe they have seen one going for a walk, but the majority of people are going off hearsay. Here are some facts about pit bulls for those people:

German Shepherds are more prone to attack someone for no apparent reason. Pit bulls are known for their loyalty, intelligence, and are faithful family pets. They are very social. They were initially bred in England, Ireland and Scotland. They later arrived in the United States with immigrants from those countries. They were used for catch dogs for semi-wild cattle and hogs, to hunt and drive livestock and as family companions (much like a Border Collie). In the early 20th century a bunch of irresponsible individuals decided to use them
as fighting dogs (in the US).

There is no evidence for the existence of a physiological "locking mechanism" in the teeth or jaw structure of normal pit bull-type dogs.

According to the American Temperament Testing Association pit bulls have, on average, an 85.3% passing rate compared to a passing rate of 81.9% for all other breeds.

Every year, more than 2,000 children in the U.S. are killed by their parents or guardians either through neglect or abuse. A child is 800 times more likely to be killed by their caretaker than a pit bull. It's 2011 and people are still unable to make their own decisions based on facts and proof. One would think that by now people would be able to do so. If you are one of those people who voted yes without knowing much about the breed, shame on you. If you have legitimate reasons for voting yes, then vote yes. But don't go off hearsay.

Any animal can cause harm, but it's all about how that animal is brought up and raised. Pit bulls should not be banned or discriminated against because of hearsay and a bunch of irresponsible pet owners.

Reading The Daily News, Saturday, Jan. 22, about the attack on the Australian shepherd and the man walking it, I agree with The Daily News' stand. Ban the deed not the breed. The dog pictured in the article by K.M. Martyn is definitely not a Staffordshire bull terrier. They stand only 14 to 16 inches at the shoulder, males weigh 28 to 38 pounds and females 24 to 33 pounds and their ears are never cropped. The dog pictured is an American Staffordshire terrier. I have shown purebred dogs since 1948, including Staffordshire bull terriers who are very lovable and playful. I have also trained and shown American Staffordshire terriers. This breed is very trainable and do not, when trained, without provocation attack other dogs or humans.